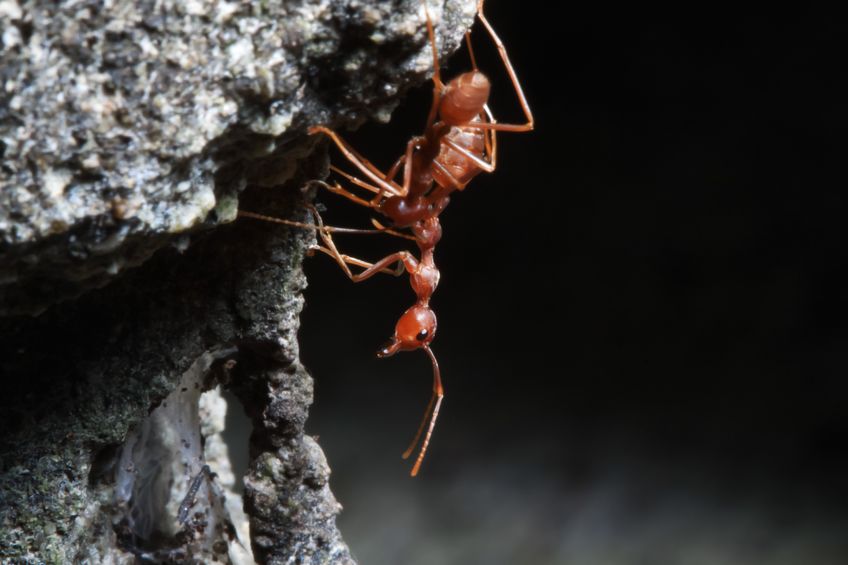 There are a couple of species of fire ants native to the United States that are difficult to get a handle on once they’ve gotten into your yard and can be a pest control nightmare. The most destructive of these species are the red imported fire ants and the black imported fire ants. A hybrid of these two species can produce serious trouble.

The following methods are the best ways to eliminate fire ants on your property. Each technique produces quick, safe results!

Baits are a slower treatment method when compared to others. They take a few months to eliminate the colony fully. Despite the length of treatment, homeowners can expect to eliminate about 80 to 90 percent of the colony. Bait treatments utilize corn grits treated with pesticide. Foraging ants find the food, then take it back to their colony. Once they’re back to the colony, they share the treated food with the queen and other ants. The pesticides will either make the queen infertile or kill her along with the rest of the colony. A baiting treatment is low-toxicity and spreads the bait across a wide area.

Mound drenching treatments require the homeowner to pour a liquid pesticide directly onto a fire ant hill. The liquid drips down into the mound and below-ground levels. As the pesticide seeps deeper into the mound, the ants slowly die. After the application, the products leave only traces of residue from the pesticide on the surface.

The dust or granule control method is slightly different depending on the execution.To begin the treatment, the user will dust the mound first.  The dust slowly sinks into the pile over time, as a light residue is usually still visible on top of the ant hill. When the user applies granules on and around the mound, several gallons of water are required to enable the pesticide. The water needs to be slowly poured over the mounds to activate the granules.

The two-step method is one of the most effective techniques for fire ant treatment. This approach covers a large area and eliminates ants quickly. First, the user applies fire ant bait to the entire affected area. After the initial treatment, the user applies a follow-up treatment to each individual mound. The bait should be used several times a year, and individual mounds should be addressed as they appear.

The products available in store are never as powerful as those licensed to pest control professionals. Also, the improper use of pesticides can be dangerous to children, pets, and plants. Arrow Termite & Pest Control uses the highest quality ant treatments to attack and eliminate ants—fast. We’ll work with you to find the best possible treatment for your yard!

What is TAP Pest Control...

What is TAP Pest Control & What Are the Benefits of TAP Insulation When it comes to...

If you are considering building your home, or you are a contractor that is building...

The Ultimate Guide to Fire...

Not only can an infestation of fire ants be a frustrating pest to eliminate, but they can...

People are constantly traveling which brings in consistent business for hotels and...

A pest infestation is a direct threat to the quality and profitability of a restaurant....